Okay, so normally I only discuss writing and book-related things on my blog here, but today let's take a quick look at Immigration Reform and tax breaks, and how it's kind of exploded into this writhing mass of a debate.  My tirade is brought on by a picture I saw posted somewhere that shall remain nameless, which I will now display to put you in the proper frame of mind for my rebuttal. 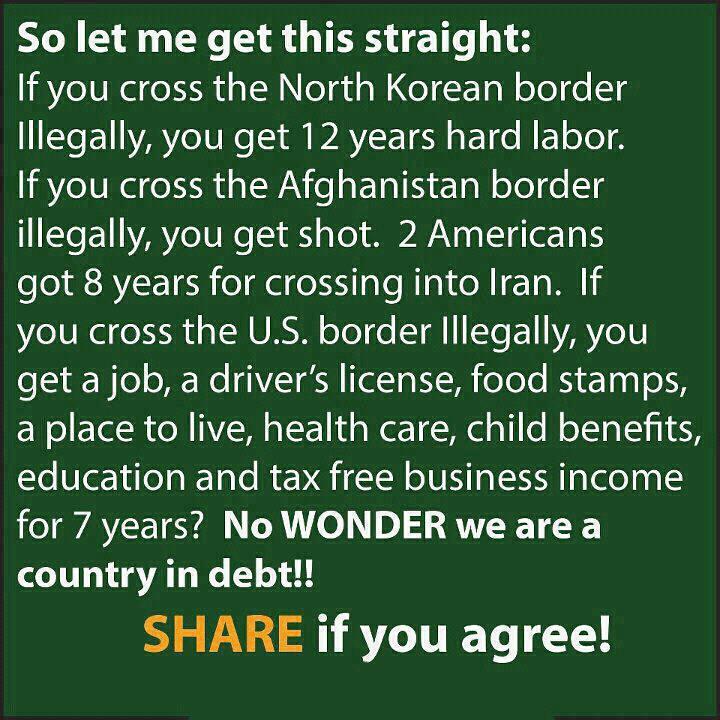 See, what the Right is trying to convince us of here is that walking across a made-up line should be punishable by death, while reaching out to our fellow man in their time of need is not only stupid, but irresponsible.  Why should we be responsible for others, especially if they're not "our kind"?  Hell, the wealthy don't even believe they have any reason to pay more taxes than the impoverished, and they use their money and power to prevent exactly that.  Why on earth should they have to give up Rolls Royces and solid gold toilet seats when instead the government can steal food out of starving children's mouths, bleed the public school systems and Social Security?  Let's all shoot "illegal" Latinos on sight and celebrate how rich the rich are while we struggle to catch the bus between two different jobs just so they don't kick us out of our studio apartments.  God bless America!

Is there a reason we shouldn't be proud to stand as the country that feeds and clothes the destitute?  "Give me your tired, your poor, your huddled masses yearning to breathe free, the wretched refuse of your teeming shore.  Send these, the homeless, tempest-tost to me, I lift my lamp beside the golden door!"  That is mounted inside the Statue of Liberty.  What happened to that mentality?  "We're all full up, Maria and José, try the inn over in next country."  Makes me viscerally ill.  We are such a conflicted country, standing on the Bible and the teachings of Jesus, yet turning away those who didn't get here "the right way".  Picketing funerals because of "fags" and using God as our excuse for such bigoted behavior, dishonoring the dead to honor the Lord.  Even those of us who aren't part of that hate group... we have created a climate in which such ugliness is possible.  Thousands of dollars (many of them tax dollars, and don't you kid yourself otherwise) are absolutely wasted fighting against a freedom that should have been granted to same-sex couples at least a decade prior.  The same goes for gun control; background checks are a common-sense measure and are NOT the same as banning all guns, yet the Wrongly-Right perpetrates an infuriating filibuster that, again, wastes everybody's time and money; we all know this is going to come to a vote again (and likely soon), so their cowardice only prevented us from adequately utilizing our Senators.  We don't want to pay more taxes, the rich really don't want to pay more taxes, and yet we complain about the national debt and the so-called "fiscal cliff"... demanding more from a government we are bankrupting by giving the politicians running it such engorged salaries that they could easily pay for two of themselves and accompanying families to live comfortably for the rest of their lives.  Even our president putting money back into the Treasury to ease the pressure of the debt doesn't inspire others to do the same.  Militant Republicans tear him down, dismiss him as ineffectual and/or demonize him as the Antichrist, and somehow this is an excuse to not emulate such commendable behavior?  I don't get that.  I don't get that at all.

But I got off-topic, even if only slightly.  Immigration reform.  "Illegal aliens."  Here, let me try this again and see if we can correct their error in logic humanity (and notice how very little effort I had to put into this): 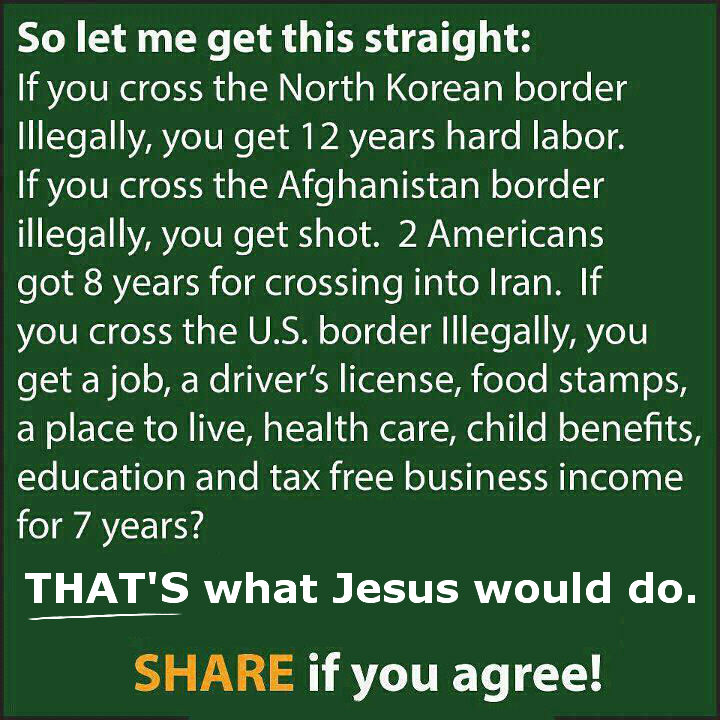 By the way, when your best example of what we should do is NORTH KOREA or AFGHANISTAN, I think it's time you checked yourself.  Those are both countries you wouldn't hesitate to condemn in any situation other than this one, so sir, I remove that card from your hand.  MY card now.  You get no card.

Oops, you forgot something.

The words you entered did not match the given text. Please try again.

Start a Free Blog at Webs.com